skip to main | skip to sidebar

Just quiet for now. I hope everyone is getting to celebrate the festive season in the way they enjoy most!
Posted by KaiaLogan at 10:25 AM No comments:

And the Winner Is...

Helen! I put litte bits of paper in a plastic tub and pulled out her number :-), so congratulations, and I'll be sending along a copy of "Sapphire Night". Enjoy!

Thanks again everyone for stopping by and sharing your stories, I love how jewelry can have such emotional significance on so many levels.
Posted by KaiaLogan at 11:22 PM No comments:

So it turns out that unfortunately I didn't hear back from Amy. Amy, if you're out there I'd still love to send you a copy of "Sapphire Night"!

And in case I don't hear from her, I'd like to give away another copy, just to keep things interesting!

If you are interested, drop me a comment (if you have a story to share about jewelry that's significant to you, I'd love to hear it, otherwise just let me know you've stopped by)--and please leave me some way to contact you. :-)
Posted by KaiaLogan at 2:59 AM 8 comments:

It's been a wonderful feeling, seeing a few reviews starting to come in for "Sapphire Night"--and I've been delighted that they've been postitive. It's a very affirming experience, having sent off your work into the "void" to get some echoes coming in that say it was worth the effort!

If you're interested, you can take a look at Mistress Bella's site at
http://mistressbellareviews.blogspot.com/2009/06/sapphire-night-by-kaia-logan.html
(Five smacks! :-) )

Twolips gave me four lips, you can see what they had to say at
http://www.twolipsreviews.com/content/index.php?option=com_content&task=view&id=4254&Itemid=36

And You Gotta Read Reviews gave me their top recommendation--you can read the thoughtful comments at
http://yougottareadreviews.blogspot.com/2009/07/review-sapphire-night-by-kaia-logan.html

Wow, it's been a pretty hectic summer, in the way only summers can be. Some parts good, some not so good, but definitely hectic. There have been camping trips, kids home from school, guests from overseas, summer camps, etc etc. In some ways it's been fabulous to be out of regular routine, just going with whatever the day or week brings us. In others, not so great.

The writer in me is feeling a growing sense of frustration: though I've had segments of time where I really ought to have been buckling down and committing to finishing something, it feels like my creative juices have all dried up. I like to think of it as Summer Daze Syndrome. And in between the daze, I keep thinking about Nora Roberts in a Q&A session I heard recently, and feeling lame. She said something along the lines of "the Muse is a fickle bitch". Boy do I agree! And I fully realize I shouldn't just be saying "Oh, my creativity isn't feeling up to much". I also realize I need to take to heart her other tidbit of wisdom, that writing is a job and you have to sit down to it every day. It's a habit you have to nuture.

Ahem. Something I most definitely have not been doing.

Also, turns out my attention span is something of a fickle bitch, too--I have three or four story ideas bubbling, any of which I think I could hammer into shape if I could just make up my mind which one to work on.

So, if you're a writer, or have any kind of project you need to get down to, what do you do to get those creative juices going, or to nuture your habit? And if there's more than one project to choose from, how do you pick?
Posted by KaiaLogan at 4:35 PM 3 comments:

It's awfully quiet around here, isn't it? I apologize for the lack of posts, but every time I sit down to write one, I get called away to fill squirt bottles or cut up watermelon. Ah, summer... :-)

I'm also trying to fit in working on a couple of new stories, keeping my inbox below 500 (there's a lot of traffic on TWRP loops!) and taking a stab at social networking. I've never wished more for a few extra hours in the day!

Anyway, rest assured that if I'm not writing blog posts it's because either my family or my writing is keeping me busy. Maybe it'll be a little different in the fall!
Posted by KaiaLogan at 3:03 PM 1 comment:

The dice rolled, and the winner is....

Amy! Congratulations, and could you please drop me an email (kaialogan@gmail.com) so I know where to send your copy of "Sapphire Night".

(I apologize for the delay in announcing the winner, hubby whisked us all away on a camping trip where there was (sob!) no internet.)

Thanks everyone for your comments and for stopping by. Hope to see you again.
Posted by KaiaLogan at 8:52 AM No comments:

Win a copy of "Sapphire Night"

So, less than two weeks until "Sapphire Night" will be available at The Wild Rose Press, which seems like a good time to announce the chance to win a copy of it.

To be eligible to win, share a memory and/or description in the comments of a piece of jewelry that is/was significant for you. It can be something of your own, or something you remember someone else wearing. You're also welcome to leave more than one comment if you can't decide between the memories/significant items! :-)

Hooray! Hubby and I finished geting the website together, you can visit it at www.kaialogan.com
Let me know what you think, or if you notice any glitches.
Posted by KaiaLogan at 12:37 AM 6 comments: 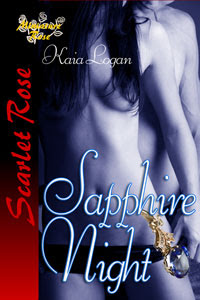 While setting up for a charity art exhibit, sculptor Jacquie Taylor is nearly crushed by her giant urn, but she's saved thanks to gorgeous photographer Ethan Wolfe. The artist and red-blooded woman in Jacquie longs to explore his shape, but she's engaged to another man. Then her fiancé cheats, and all bets are off. Jacquie allows herself to indulge in Ethan's charms to drown her sorrows—a night so steamy and intense it leaves her breathless. But when Ethan wants more than one night of passion, Jacquie panics. How can she even think about letting another man into her life...and her heart?

"Hi," he said, stepping into the small space of the elevator. The rumble of his voice sent a little run of goose bumps up her spine.

"Hi again." She tried not to stare. He'd looked good last night in his jeans and T-shirt, but in a tux? "I guess you're not heading to the pub tonight."

"Not tonight." A smile crinkled the corners of his blue eyes. "It's the monkey suit for me."

"And a very nice monkey suit it is," she said. "Although..." Her gaze lingered on his bowtie. It was a crazy impulse, she knew, but she wanted to step closer, have a chance to inhale his scent, feel the heat of his body.

"What? Am I crooked?" He reached a tanned hand to the base of his throat.

Jacquie stepped forward. With fingers that trembled ever so slightly, she straightened the already straight bowtie. He smelled—and looked—even better up close. His blue eyes were entirely serious all of a sudden. A slow pulse began between her thighs, she couldn't look away.

"Thanks," he murmured, and seemed about to say something else when the elevator door slid open. Lights from the ceiling chandeliers and the hum of voices from the foyer washed into the small space.

"You're welcome," she said, stepping back.

There was a beat of silence, and then Ethan offered his arm. "Shall we?"

Jacquie tucked her hand into the crook of his elbow. That pulse still beat low in her belly, and the feel of his muscled arm, even through the fabric of his jacket, didn't help. This is crazy, but I don't care. This evening is already going better than I could possibly have imagined a few hours ago. In fact...

An image, startlingly vivid, flashed through her mind. Ethan's mouth coming down on hers, his hands sliding the straps of her dress from her shoulders, his hands exploring her body until she shivered and moaned...
Posted by KaiaLogan at 10:48 PM 3 comments: